Combatting Corruption: An Institutional Economics Approach for More Integration in the Eurozone

The European multi-year debt crisis was a wake-up call for the Member States (MS) of the Eurozone to tackle corruption. It is hard to estimate corruption costs, but European reports indicate a staggering amount between €179 billion and €990 billion in losses annually.[1] While some have recommended stronger banking sector coordination and monetary programs, such as the European Stability Mechanism (ESM) and Quantitative Easing, few scholars have addressed the lack of trust between creditors and debtors.[2] The European debt crisis has divided member states into a group of creditors (e.g., Germany), backed by the International Monetary Fund, and a group of debtors (e.g., Greece). In this context, creditor countries are reluctant to further integrate their national economies with those of the debtors. From an institutional economics perspective, an enforceable anti-corruption policy would help to restore trust between debtor and creditor MS.

Institutional economics theory tells us that economic growth requires inclusive and accountable political and economic institutions. The economist Dani Rodrick’s Political Trilemma shows that stronger institutions help economic growth. According to this model, the EU will continue its process of global federalism: a combination of deep economic integration and democratic politics.[3] The latter, however, would require MS to give up more sovereignty to the EU. Since creditor countries oppose more collectiveness, burden-sharing, and interdependence, deeper economic integration is likely to be a stumbling block. This is the so-called debtors versus creditors challenge.

Figure 1 shows three sub-groups of MS: creditors (AT, DE, EE, FI, IE, LT, MT, NL, SI, SK) in blue; debtors (Cyprus, Greece, Italy, Portugal, and Spain) in red, except Belgium and France in green, and three outliers, in orange. The graph indicates that European citizens living in debtor countries tend to support more coordination, whereas those living in creditor countries do not. Since debtor countries often have poor fiscal discipline and governance, creditors are reluctant to expose their markets to greater risk by giving up sovereign protections to the EU.[4] For instance, Greece has more than 175% gross debt share to GDP. Accordingly, 79% of Greek nationals are in favor of more integration. In contrast, in Germany, a country with a 64% gross debt share to GDP, only 60% of citizens support deeper integration. 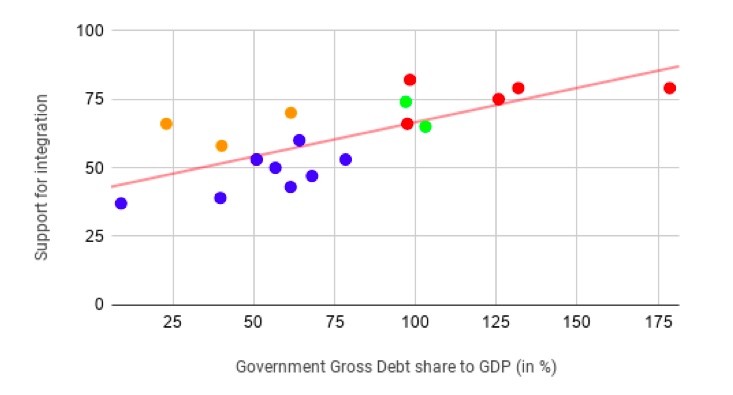 Even though creditor countries are reluctant to support more collectiveness, burden-sharing, and interdependence, it seems that some debtor countries can borrow more than others. Indeed, accumulating debt is not a problem if the country has competent fiscal and governance systems. Take Belgium and France as two examples. These countries have 103.1% and 97% gross debt share to their GDP, but they have maintained more autonomy in their fiscal policies than debtor countries, such as Cyprus, Greece, Italy, Spain, and Portugal. This supports the institutional economics theory that economic integration requires countries to strengthen their institutions. 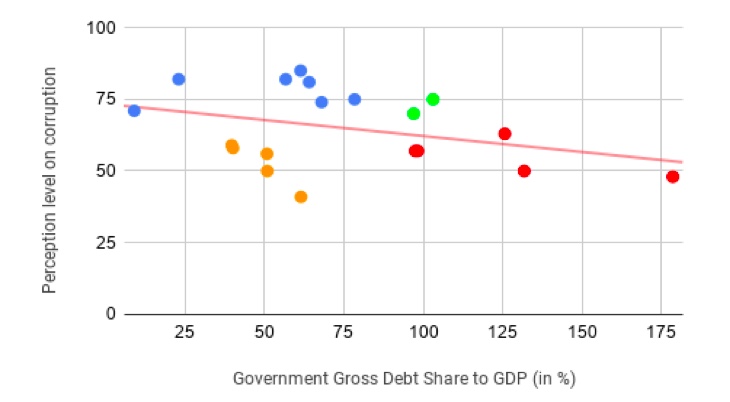 To overcome the debtor and creditor challenge, the European Commission (EC), an independent body and the guardian of the treaties, should have new powers to monitor and assist national initiatives to combat corruption. So far, the EC has no authoritative power to do so.[7] Article 83 of the Treaty on the Functioning of the European Union, however, offers the legal basis for this proposal. The treaty criminalizes corruption and enables policymakers to develop an enforcement mechanism with both investigative and regulative powers. Such an enforcement mechanism should be modeled after the the EU Competition policy. It should also follow the principle of subsidiarity, and be supervised by representatives of national prosecution offices and the chair of the EP Committee on Civil Liberties, Justice, and Home Affairs.

This proposal to shift some sovereignty from MS to EU institutions will have to overcome creditors’ resistance to more collectiveness, burden-sharing and interdependence within the Eurozone. The current divide between debtors and creditors is fueled by the perception, and perhaps reality, of poor fiscal and governance systems in debtor states. Equipping the EC with the authority to monitor and enforce national anti-corruption policy similar to the EU Competition policy would standardize anti-corruption measures throughout the Eurozone.

Photo by Markus Spiske on Unsplash

[2] Avgouleas, Aimilios and Arner, Douglas. “The Eurozone Debt Crisis and the European Banking Union: ‘Hard Choices’, ‘Intolerable Dilemmas’, and the Question of Sovereignty,” The International Lawyer 50, no. 1 (2017): 29-67; Cohen, Benjamin J. “The Coming Global Monetary (Dis)Order”, in Governance at Risk, edited by David Held and Charles Roger. Cambridge: Polity Press, 2013; Schmidt, Vivien A. “The Forgotten Problem of Democratic Legitimacy: Governing by the rules and ruling by the numbers”, in The future of the Euro, edited by Mark Blyth and Matthias Matthijs, 90-114. Oxford: Oxford University Press, 2015.

[3] Rodrick, D. (2011) The Globalization Paradox: Democracy and the Future of the World Economy. New York

Holding a BA in European Studies and an MA in International Relations, Johann is now working in the financial market as a researcher for Institutional Shareholders Services. His fields of interest are Eurozone governance, the European Single Market, and European foreign affairs. In addition to this, he has also acquired significant diplomatic experience as an intern at the Permanent Mission of Belgium to the UN and as a permanent delegate at the United Netherlands in Oxford and Harvard.

A Call to Action: Europe in a Post-American World

Faced with a historic crisis spawned by COVID-19, the United States has withdrawn from its role as a moral and material leader within the international system. The EU and its Member States must react swiftly both internally and externally to address the complex challenges of the emerging multi-polar world.

A Smarter Approach to Europe’s Border Policy During the Pandemic