Neoclassical economic theory assumes that consumption happens in a vacuum. But what early economist Adam Smith and sociologist Thorstein Veblen recognized is that consumption is influenced by social relations. The desire to maintain or improve one’s social standing can lead to wasteful and socially harmful behavior. Today, this is known as “competitive” or “conspicuous” consumption.

In her book The Overspent American, Professor Juliet Schor elegantly described how competitive consumption leads to the paradox of undermining everyone’s wellbeing: “[…] competitive consumption creates a ‘prisoner’s dilemma’ […] If the Joneses could be induced not to upgrade their car or house or whatever, then the Smiths wouldn’t have to either, and both would be happier.” [1]

Conspicuous consumption leads to an “arms race” in status acquisition, the potential consequence being a decline in the financial position of those involved.[2] Indeed, competitive consumption has long concerned economists because it represents a zero-sum game: one person’s gain in status invariably means another person’s loss in status.

The rise of conspicuous consumption can be seen in data from Schor in the table below noting how goods once classed as “luxuries” are now deemed “essentials.”[3]

Consumption is normally the largest portion of GDP. While it is true that we consume to live, it is also true that we consume to project a certain image of ourselves to others. This was seen in the run-up to the financial crisis of 2007-2008, where, aided in an environment of low interest rates and other unwise policy decisions, many chose to take out mortgages in pursuit of the “American Dream.”

One study by Lee, Mori, and Qian looking at a dataset for the Singaporean economy found that “status-seeking-induced conspicuous consumption is an important determinant of household indebtedness.”[4] They went on to add that, unlike traditional economic theory, liquidity constraint is not the only determinant of household indebtedness: social influences play a part as well. 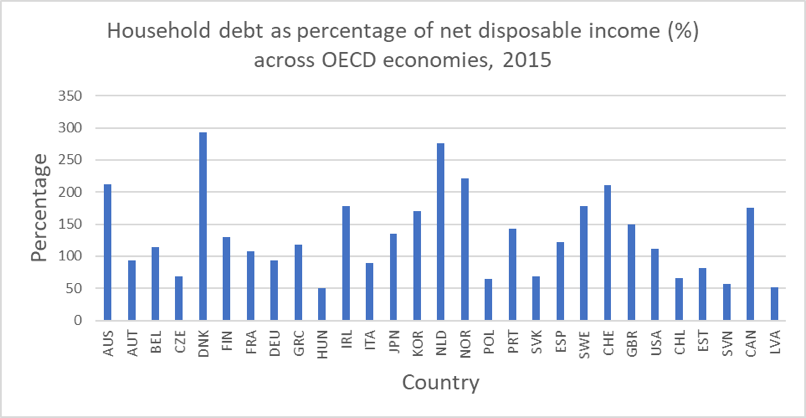 In her book, Professor Schor hinted at a solution to competitive consumption: individuals need to be incentivized by “a central coordinating entity – like the government.”[6] This could mean imposing a tax on luxury goods, for example, to correct for the negative externality associated with status acquisition. Both Pigou and Mill supported this, and Schor pithily wrote that “consumption taxes are a start.”[7]

But there is perhaps a simpler and more effective way to discourage conspicuous consumption: making everyone’s credit score public.

Although luxury taxes can sometimes be effective policy instruments against conspicuous consumption, they are also constrained by the bureaucracy that comes with their implementation. Trends in luxury goods come and go so often that taxation rules would continually need to change – an unreasonable task. Furthermore, the efficacy of a luxury tax depends upon the price elasticity of demand: in fact, from a purely a theoretical standpoint, such a tax may have the inadvertent consequence of increasing demand thereby encouraging conspicuous consumption.

Conspicuous consumption across many advanced economies today is underpinned by asymmetric information: we consume to convey an image of ourselves to others not necessarily reflective of our true wealth. Many go into debt purchasing status goods to portray an image of themselves inconsistent with their actual financial position.

Like the classical case of asymmetric information put forward by Akerlof,[8] society is arranged in such a way that people are incentivized to take on debt in order to maintain their status. This results in “lemons” – that is, those heavily indebted – enjoying privileges denied to the frugal: lemons get nods of approval in the streets, more attention from potential romantic partners, and in some cases even improved employment prospects.[9] We tend to think the wealthy spend a lot on luxury goods, yet Schor, referring to Stanley and Danko, noted that they found that “most millionaires live frugal lives – buying used cars, purchasing their suits at JC Penney, and shopping for bargains.”[10]

Making people’s credit score publicly available would address the asymmetry of information that currently exists with respect to status: those living beyond their means would be quickly exposed as “lemons” or “posers,” while the prudent would be rewarded with public acknowledgment of their financial responsibility. Governments could implement the policy by launching a web portal displaying a person’s average credit score from the leading credit rating agencies. An individual’s score could then be accessed by simply typing in their name.

Conspicuous consumption is still today a significant determinant of household debt – a major problem for any economy. The current system rewards the profligate and penalizes the frugal. But making individual credit scores public would turn this on its head, encouraging financial responsibility and redressing the unfairness of a system built on credit.

[2] This arms race also has the consequence of producing a “hedonic treadmill,” where gains in income lead to no gains in happiness. This is evidenced, among many other things, from the rise in the median response among American households on how much income they need to fulfil the “American Dream”: from $50,000 in 1987 to $90,000 in 1996, constant prices. See Schor (1998).

[9] In their draft study Conspicuous Consumption and Household Indebtedness, Lee, Mori and Qian noted in the dataset they analyzed that young Singaporean males were more likely than other demographic groups to take on debt to engage in status-seeking behavior. This may be explained in part as an effort to attract women, as research suggests women are in many countries, on average, more attracted to men with wealth. Cf. Stanford Graduate School of Business. 2014. Professor Paul Oyer: The Economics Of Dating, Job Hunting, And More. Video. https://www.youtube.com/watch?v=LmhILSGA2bA&t=2324s.

This article explores the advantages of devolved governance in city planning instead of a centralized approach. Transferring decision-making power from central government to the local level can equip cities with the flexibility to respond to critical policy areas such sustainable infrastructure and quality social housing.

Achieving Integration for Immigrants in Iceland

Despite introducing ground-breaking social policies, Iceland lacks a cohesive approach to ensure the successful integration of immigrants. This group is left unprotected against hidden discrimination in the housing, employment, and education sectors. The successful integration of immigrants should involve treating them as agents of positive change in society.

Babatunde Valentine Onabajo is from London. He is a graduate of both King’s College London and Cardiff University. In 2016, he was named the United Kingdom’s graduate of the year by the search engine Adzuna. He is currently building a mobile phone app.

The Dangerous Depoliticization of Economic Numbers

Daniel DeRock exposes the shaky foundations of macroeconomic statistical methods – from GDP figures to debt measurement – and argues for a fundamental rethinking of how scholars and policymakers engage with quantitative indicators.

Blockchain and the Fight Against Illicit Financial Flows

Illicit financial flows have staggering consequences for global health and development in the world’s poorest countries. Existing policies address this issue but their success is limited by a paradigm of centralization. Blockchain and mobile technologies have enabled new policy possibilities around a paradigm of decentralization and disaggregation to a wider range of stakeholders.

Fossil fuel subsidies are bad. Bad for government budgets. Bad for the economy. And bad for the climate. While reform efforts have focused on cutting consumer subsidies, those for production remain prevalent. To realize global climate ambitions, the G20 has to get serious and end producer subsidies.